In July of 1968, my parents went on their honeymoon to a brand new Arkansas amusement park, Dogpatch U.S.A.  Dogpatch was themed for the Al Capp comic strip, “L’il Abner,” which drew from the lives of Southern country folk to offer subversive satire on wealth, war, and politics.  In 1956 L’il Abner became a musical play, with lyrics by Johnny Mercer.  I myself am Southern country folk, and I’ve loved L’il Abner since the summer the Greene County Fine Arts Council staged it in my hometown of Paragould, Arkansas, with my own mother playing the part of Mammy Yokum.  Lately, a particular tune from the show has been stuck in my head: “Jubilation T. Cornpone.” 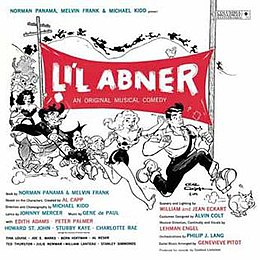 Within the world of L’il Abner, Jubilation T. Cornpone is Dogpatch’s town founding father.  He is a hero to the citizens.  The invocation of his name leads to cheering wild abandon and a dismissal of reason in favor of whoopin’ and hollerin’ support.   Dogpatch’s evangelical fire-and-brimstone preacher, Marryin’ Sam, is Jubilation T. Cornpone’s greatest supporter and advocate, singing Cornpone’s praises to all the people.  Marryin’ Sam says, “J.T. Cornpone didn’t know the meaning of the word fear.  Terror yes, but fear never.” (Let the reader understand.)

In addition to founding Dogpatch, Jubilation T. Cornpone was a Confederate general, and his claims to fame mostly extend from the Civil War.  With each stanza of the song, Marryin’ Sam sings about Jubilation’s heroic exploits in rip-roaring terms, but by each verse’s end, the listener realizes that those exploits have all turned to disaster.  Marryin’ Sam shares the names of the many and varied great battles against his enemies for which Jubilation T. Cornpone is heralded: “Cornpone’s Disaster,” “Cornpone’s Misjudgment,” “Cornpone’s Catastrophe,” and “Cornpone’s Humiliation.”  For example:

To which Dogpatch’s citizens cheer with an utter detachment from reality, “Hurray!”

Again and again, Jubilation T. Cornpone creates a crisis, addresses the crisis of his own creation with a “solution” that deepens distress, and then claims victory atop the layered heap of disaster.  And all the while, the people cheer (encouraged by the evangelical preacher).

The above stanza’s allusion to ruined crops is almost reminiscent of our day, in which a sledge-hammer trade war has led to a broad and severe crisis for American farmers, which is then heroically addressed by propping up farmers with subsidies paid for through borrowed money financed largely by the same country with whom the trade war blazes.  And the people shout, “Hurray!”

Ultimately, Marryin’ Sam tells us, Jubilation T. Cornpone ran for President.  (Because, why shouldn’t he? His track record surely supported such an idea!)

One thought on “Jubilation T. Cornpone (or, When Reality Mimics Art)”