Inspiration comes from the strangest places…

This past week I was in Tallahassee at the spring meeting of a colleague group, Downtown Episcopal Clergy of the New South (DECONS). I always leave the DECONS meeting energized and renewed for ministry in the Church, and I always enjoy the company of my colleagues and friends.  Even so, this time the most memorable nugget I received came from an interview in the hotel’s complimentary copy of Details Magazine (May 2013).

The interview is with Bradley Cooper, he of such cinematic breadth as “Silver Linings Playbook” and “The Hangover.” Yes, that Bradley Cooper. Yes, seriously.

But permit me to digress. Often I hear people inside and outside of the Church discuss the demise of institutional religion. Some lament and others rejoice at this supposed fact. It is claimed that corporate worship no longer connects with the prevailing culture. It is suggested the things of worship are arcane and bankrupt of spiritual heft and meaning.

And then an interviewer in Details Magazine asks the reigning king of Hollywood–and thus The Lord of All Things Pop Cultural–Bradley Cooper whether he (Bradley) is religious. I winced before reading Mr. Cooper’s answer, because I am conditioned to expect the famous either to caricature and lambast Christianity or else peddle a superficial and half-baked practice of Kabbalah or Buddhism.

But here is what Bradley Cooper says:

“I grew up Roman Catholic.  I was baptized. I always loved the pageantry of it. A lot of it had to do with loving my father and looking at him wear his tweed blazer to Mass. I loved the way he prayed, so I would pray like he would. Not for any other reason than I wanted to be like my father–I wanted to be like Charlie Cooper. But in so doing, through the ritual of it, I started to have faith in God. Am I a spiritual person today? Yes. I don’t know how I could not be. It’s like saying, ‘Do you breathe?'”

It’s difficult to imagine a better articulation of why corporate worship matters, why liturgy matters, why family observance of ritual matters, why the Church matters.

And all from Bradley Cooper. Inspiration comes from the strangest places.

Two weeks ago, Italian businessman Antonio Fiore was finishing up his business trip in Houston.  He had a few minutes to spare before heading to the airport, and so he chose to walk around downtown and take photos of the impressive gleaming glass buildings of our city.  As Antonio progressed through the streets, something out of place caught his eye in the distance.  In an email of somewhat broken English, this is what he says:

“From far away I noted a church, which was quite difficult to believe, that a low building could stay among such tall buildings in the city.  And by the time I was getting near to it I was feeling delighted, as it is nice to me each time I am around the world and I discover a church on my path…I had a chance to walk through your garden but then my timing was short and I had to return fast to my hotel and to the airport…Now I am in Africa [on business], but I haven’t stopped thinking of the lovely Christ Church Cathedral of Houston…God bless all of you.”

It is difficult to believe that a low building could stay among such tall buildings in the city. 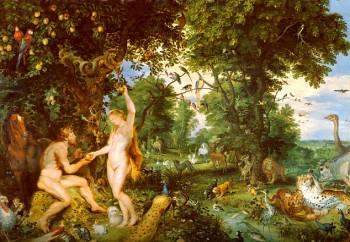 Of course, the biblical narrative begins not in a city but in a garden, one I would like to imagine resembled—just a little bit—our own courtyard.  Genesis describes that garden in detail, and in it there are no tall buildings.  Through the garden flows a great river, the river of the water of life.  In the garden there is also the tree of life, but from it human beings are prohibited to eat.  Adam and Eve have already illegally eaten of the tree of the knowledge of good and evil, and God casts them out of Eden before they can also eat of the tree of life and become like God.  They—we—are cast out of the garden, away from the river and the tree, away from God’s very presence.

That is the beginning of the human story.  And the rest of the story is marked by two competing strands of narrative.  In the first, we defiantly walk away from Eden and thumb our noses at God.  Beginning with the Tower of Babel, we build cities—Nineveh, Babylon, Rome, New York, Houston—monstrous opposites to the garden, with buildings that reach the heavens as if to say to God, “See, we don’t need your tree of life to be like you!” 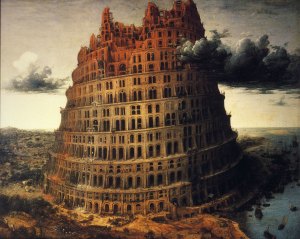 The Tower of Babel: Striving to be God

From biblical times until today, human cities have been marked by energy and exhilaration, but also by crime and poverty and pollution and the striving of men and women to reach the top, both literally and figuratively.  In our attempt to create heaven, we’ve sometimes created a version of hell.

The other strand of narrative that makes up the human story since our ejection from Eden is the attempt to sneak back into the garden.  I experienced this as a revelation when I studied in London in college and took my first trip to Hampton Court Palace at the edge of the great city.  In the early 1500s, Cardinal Wolsey built Hampton Court as an escape from the smells, disease, and turmoil of the city, and nowhere on the grounds does one grasp this better than in the gardens.  Hampton Court’s gardens intend to transport us back into Eden, to grant us a brief experience of amnesia so that we can forget our separation from God.

But we don’t need royal palaces to underscore this strand of the human narrative, do we?  Our poetry, our music, our literature extol the virtue of the pastoral, the rural, the garden over and against the city.  This is what the mid-century flight to the suburbs was all about: the vain hope that a quarter acre of yard and a curbed street could become a small slice of Eden beyond the reach of the city.  Of course, what we got instead was the city creeping out to meet us as urban sprawl.

Consider the end of the human story, the last chapter of Revelation, which bumps up against the back cover of your Bible.  St. John the Divine’s vision gives us a glimpse of what God’s ultimate salvation looks like.  And to the surprise of the poets, it is not a return to the garden.  Hear again what John says:

“And in the spirit he carried me away to a great high mountain and showed me the holy city of Jerusalem coming down out of heaven from God…the glory of God is its light, and its lamp is the Lamb. The nations will walk by its light, and the kings of the earth will bring their glory into it. [The city’s] gates will never be shut by day—and there will be no night there…Then the angel showed me the river of the water of life, bright as crystal, flowing from the throne of God and of the Lamb through the middle of the street of the city. On either side of the river is the tree of life with its twelve kinds of fruit, producing its fruit each month; and the leaves of the tree are for the healing of the nations.”

Did you catch that?  Our redemption does not equal a return to Eden.  It is in the city that God redeems us.  It is the city that God redeems!  In ways mysterious to us, our expulsion from Eden after eating of the fruit was for our good.  It was not apart from God that we created cities.  God was with us all along.  Our failure was that we did not know it.  We built our cities pretending to be God[i] rather than acknowledging in humility that ours was God’s work.  Whatever else God’s redeemed world includes, Revelation says forthrightly that it includes the diversity of peoples, the languages, the din of activity that mark the city.  Through the city God will redirect the river of the water of life.  In the city God will replant the tree of life.  And the fruit of that tree will be balm to all who enter the city’s open gates.

Not Eden, but Houston.  God is here, offering light and life.  And that lays upon us the profound, immediate, and central responsibility to serve as God’s agents of redemption here.  We are to be the fruit of the tree of life for God’s people.

Antonio Fiore was startled and amazed to find the church nestled right in the midst of Houston’s tall glass buildings.  In his wonder he caught a glimpse of St. John’s vision: that the garden exists not apart from, but in the very center of the city.  We, like the nations in Revelation, stream here to Christ Church each week from Katy and Sugarland and Pasadena and Tanglewood and River Oaks, and it matters.  We are called through our sacred worship, through our glorious music, through our spiritual formation, and through our indispensible work with the homeless and the poor—through all these things—to make the presence of God flow from here down Texas and Fannin and Prairie and Main, like the water of the river of life.  Until God fulfills all things, it is not too much to say that we are his vanguard.

As we are about this work, let’s remember that God is here—at Christ Church Cathedral and in this city.  God’s love shades us like the arbor of the tree of life.  God’s love heals.  God’s love draws God himself from heaven to abide with us, among the tall buildings, in the city.

[i] Which is what the story of Babel is all about.