I have a confession to make: I am preoccupied with what others think of us.  I know it’s a bad thing to be so preoccupied.  It may even be a vice.  I’m not preoccupied with what others think of the Cathedral per se, but rather with how others view The Episcopal Church.  Let me be clearer still.  It is not people’s opinions of our “hot topics” and controversies that preoccupy me.  No, what steals my attention is how people view our eccentricities and quirks.  And as Episcopalians, we have more than a few of them!

Take, for example, the hymn we just sang at the sequence, “I sing a song of the saints of God.”  As the hymn chronicles the lives of the saints, among its verses is:

And one was a soldier

And one was a priest,

And one was slain by a fierce wild beast:

And there’s not any reason—no, none in the least,

Why I shouldn’t be one too.

In case you missed it, this stanza seeks to convince us that being gored and eviscerated by a wild animal is good stuff, worth considering for the Gospel.  Do you think this was any more convincing when it was written in 1920 than it is today?

Because, try as I might to reform, I still care about what others think of us, I checked out some blogs on the internet to see what others say about our hymn “I sing a song of the saints of God.”  Let me tell you, they’re not very charitable!  No one but us seems to like this tune; all others poke fun at it.  One blogger went so far as to suggest a new slogan for us: “The Episcopal Church—Great preaching.  Very silly British hymns.”  At least he liked the preaching…

The hymn was written by Lesbia Scott, an English mother who wrote songs for her children, never intending for any of them to be published.  Her children would beg, “Write us a song about a foggy day,” or “Make us a hymn about a picnic,” and Mrs. Scott would oblige.[1]  And one year, as the Feast of All Saints approached, she determined to write a song that would inspire her children and teach them something about the commitments of Christian faith.

The lyrics risk being lost on us, as they surely are on the internet bloggers.  Another verse says:

And one was a queen,

And one was a shepherdess on the green.

The bloggers have a field day with this line, calling it trite and out-of-touch.  I mean, “shepherdesses on the green?”  Who talks that way?

But in point of fact, the doctor Mrs. Scott refers to in that verse is St. Luke the Physician, the world’s first investigative reporter who sifted through all the available information floating around about Jesus in order to write the books Luke and Acts, our greatest historical chronicles of Jesus and the early Church.

And the queen is tenth-century Margaret of Scotland, who not only ruled Scotland during dark times with justice and peace, but also modeled that age-old reality that it is the wife who so often draws her husband and family to God.  You see, because of Margaret, King Malcolm of Scotland went from being little more than a barbarian to being a good and even holy king.  Margaret’s biographer says, “[Malcolm] saw that Christ truly dwelt in her heart;…what she rejected he rejected;…what she loved, he for love of her loved, too.”[2]

The shepherdess on the green is none other than Joan of Arc, who went from peasant herder of sheep to savior of the French nation.  And later in the song, that saint who is killed by “a fierce wild beast?”  That’s Ignatius of Antioch from the first century.  Both Joan and Ignatius died as martyrs for their faith, but both also faced serious occasions of fear and doubt.  As he was being transported to his death in Rome, Ignatius wrote feverishly to his flock, praying that his courage would hold out and he would not beg for mercy when faced with the lions.[3]

Joan of Arc, the “shepherdess on the green”

In order to teach her children, in other words, Mrs. Scott’s motivation was not silly, sing-song rhymes.  She chose her saints carefully.  She selected remarkable Christians, but also those who were very human, with all the outer challenges and inner frailties faced by each of us.

And it is not even with these great saints that “I sing a song of the saints of God” ends.  I have a feeling that Mrs. Scott was familiar with the traditional reading for All Saints Sunday that we read from Ecclesiasticus this very morning.  In that reading, the sage says, “Let us now honor the praises of famous men…to whom the Lord apportioned great glory.”  But he goes on to teach that, “Of others there is no memory; they have perished as though they had never existed…But these also were godly people, whose righteous deeds have not been forgotten.” 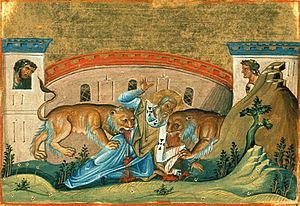 St. Ignatius and the Lions

Yes, I have a feeling that Mrs. Scott knew this reading.  She also believed it—that the Communion of Saints is populated not primarily with kings and prophets but with the masses of people struggling to love God and to live their lives as God would have them lived.  She wanted her children to understand this, too.  And so the final stanza of her hymn is:

They lived not only in ages past,

There are hundreds of thousands still,

The world is bright with the joyous saints

Who love to do Jesus’ will.

I’m with Mrs. Scott.  I believe it.  I’ve seen these saints.  I knew one in my grandmother, who loved and tended to the needy with a quiet passion.  It is her more than anyone else who comes to my mind when I hear the Beatitude (which we sometimes read on All Saints Sunday) “Blessed are the pure in heart, for they shall see God.”

I’ve seen these saints as nurses and physicians who sit at the bedsides of the ill and dying, treating them not as clinical cases but as souls seeking comfort.

I’ve seen these saints volunteering at the Beacon…and caring for God’s creation…and studying Scripture…and telling someone they will pray for him and then actually doing it.  I’ve seen them laugh with those in joy and cry with those in sorrow.  In my almost seven years at Christ Church, I’ve seen them, again and again, right here.  The hymn ends:

You can meet them in school,

In church, or in trains, or in shops, or at tea,

For the saints of God are just folks like me

And I mean to be one too.

Indeed.  I think I’ll keep our silly British hymn, thank you very much.  Would that more of us were like Mrs. Scott and took the time to know and share these stories of people of faith: some of great renown but others sitting in these very pews among us, inspiring us by their quiet faith to share grace in a broken and sometimes dark world.

On this All Saints Sunday we honor and remember them all, both known and unknown, and we honor them best when we love the God they love…when, by the grace of that God, we seek to be saints, too.

[2] Ellsberg, Robert.  All Saints: Daily Reflections on Saints, Prophets, and Witnesses for Our Time, 253.