A new Sunday School teacher was struggling to open a combination lock on the classroom supply cabinet. She had been told the combination, but she couldn’t quite remember it. Finally she went to the rector and asked for help. The rector came into the classroom and began to turn the dial. After the first two numbers he paused and stared blankly for a moment. Finally he looked serenely heavenward and his lips moved silently.  Then he looked back at the lock, quickly turned to the final number, and the lock opened. The teacher was amazed. “I’m in awe at the strength of your prayer, Father,” she said. “It’s really nothing,” the priest answered. “The combination is written on a piece of tape on the ceiling.”[i]

Christians pray a lot.  Episcopalians pray more than most.  My goodness, we’ve already prayed the collect for purity and the collect for the day in this service, and we’re not even to the halfway point yet!  The book with the cross on it that we treat as if it were the Bible’s big brother is called, of course, the Book of Common Prayer.  Yes, we pray all the time.  But when we pray, what exactly are we doing?

I’m reminded of that great, climactic scene in the Jack Nicholson-Tom Cruise movie “A Few Good Men.”  Nicholson is on the witness stand, and Tom Cruise is interrogating him.  “You want answers?” Nicholson growls.  “I want the truth!”  Tom Cruise cries in reply.

That captures in a nutshell what we want from prayer most of the time, I think.  We want answers: solutions to the things in life that vex us and those we love.  If my loved one lies weakened in the hospital, I want the cure that will restore her to wholeness and health.  If my job is a slog, I want the message that will tell me how to endear myself to my boss, or at least to smite him in front of my co-workers.  And if I’m a student struggling in school, I pray for the actual, literal answers for the Scantron bubble sheet on the desk in front of me.

In today’s Gospel, Jesus gives us the very paradigm for Christian prayer.  He teaches the disciples what we call the Lord’s Prayer, and it bears a closer look.

There is petition in the Lord’s Prayer, but only a little, and it has a different character from the prayers I described above.  Jesus encourages us to ask for only two things: our daily bread and help resisting temptation.  A couple of years ago Pope Francis helpfully offered a thought on the line about temptation.  “Lead us not into temptation” is “not a good translation,” the Pope said.[ii]  “Do not let us fall into temptation” is better, or, “When temptation threatens, lend us a hand.”  I like that.

Daily bread can be construed literally or metaphorically.  It means, in essence, “God, grant us the strength to persevere through another day.”

By way of petition and intercession, that’s about it.  The weight of the Lord’s Prayer is elsewhere, and the key to grasping how it encourages us to pray is in those following verses of Matthew, most remembered by Episcopalians in the hymn we sang just before the Gospel reading: “So I say to you, ask, and it will be given to you; search, and you will find; knock, and the door will be opened for you. For everyone who asks receives, and everyone who searches finds, and for everyone who knocks, the door will be opened.”

At first that reads as if we are, once again, searching for answers.  But walking through a doorway, across a threshold (which is the prevailing image in Jesus’ words) is not the same thing as solving a puzzle or being given an answer, is it?  What is it like?

Let me tell you a story.  I am originally from Northeast Arkansas, and a couple of hours west of my hometown one reaches the Ozark foothills.  There, the Spring River runs swift, and throughout my childhood my grandparents took my siblings and me camping on its banks.  Once, when I couldn’t have been more than five or six years old, my grandfather Pop took my brother Robert and me by hand and waded with us into the river.  He turned with us against the current and said “Walk,” and we, with our spindly legs, tried to push against the flow of the stream.  It was physically difficult, but more than that, it just felt wrong, as if we were pushing against the force and tide of how the river was supposed to go.  Then Pop looked down at us with his shock of white hair and wise smile and said, “Now, turn around.”  We did, and Pop led us forward with the river’s current.  The difference was, of course, immediate.  The struggle relented, and we were moved along with the river’s flow.  There was still effort required, of course, not to lose our footing and be swept along too quickly, but it became an effort that felt right, in concert with wherever it was the river sought to move.

I believe that is what prayer rightly and most often has as its purpose and goal.  Prayer is that posture of body, mind, and spirit whereby we turn around in our lives and orient ourselves to the flow of God’s Spirit.  It is not, after all, primarily about getting things from God but about shifting ourselves from the attitude of “I want answers!” to being buoyed along with God’s own hopes for us and for the world God has created.  Prayer is a letting go into the current of God. 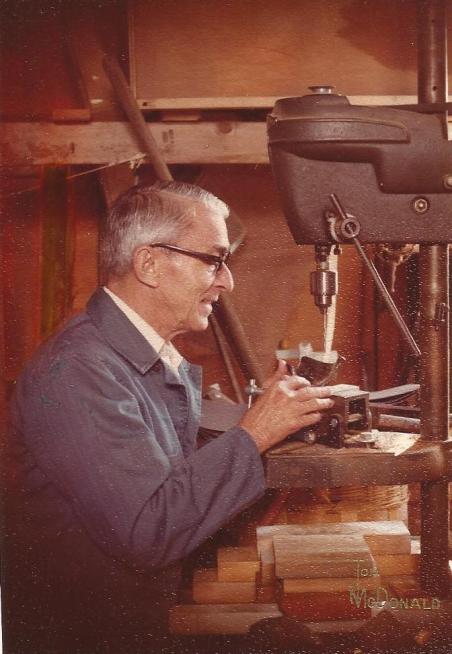 Pop, in his wood shop

The Lord’s Prayer begins with “hallowed by your name; your kingdom come.”  It ends, as we’ve already said, with “Do not let us fall into temptation,” which is another way of saying, “Help us not to turn against your current, but to walk with it, and thus with you.”  This is adoration and oblation, which are the two kinds of prayer with which the Prayer Book catechism’s explanation of prayer actually begins and ends.[iii]  A prayer of adoration expresses our love and joy for God for its own sake.  It says we adore God, which is the first and necessary requisite for any prayer.  A prayer of oblation offers ourselves to God.  It says, “I want to move into the current of your being,” which is, of course, love.

One more story.  Joy Sylvester-Johnson is a friend of mine, a brilliant pastor and teacher who knew all there is to know about prayer.  And then her husband died unexpectedly and tragically from a head injury after falling on the ice.  John lingered for weeks, and no prayer of petition or intercession led to physical healing for John’s wounded brain.  Nevertheless, as Joy sat with John she prayed, and she chronicled daily the ways in which her prayer was transformed and thus she herself was transformed in the process.  On day thirty-four after John’s accident, Joy wrote this:

“Here is what I know: at the darkest point of the night when there was no sound except my own breathing, the presence of our Comforter [was] with me.  It prepared me—regardless of the outcome—to be at peace…Over the last thirty-four days I have had time to remember and to dream, but most of all I have had time, without any distractions, to be in the presence of the One who loves John more than I do.”

For Joy, petitions and intercessions—the need for answers and solutions—receded, and she walked through the door, across the threshold, to something much deeper, something that she sought even before she knew she was seeking it.  She turned from walking against the flow of God’s Spirit in her own need and found the buoyant peace that comes when we enter into the current of God’s love.

Seek and ye shall find, says the Lord.  The current of God’s Spirit is all around us.  We need only heed the voice of God that says, “Now, turn around.”

[i] Found on the internet, where else?

[iii] Other than the bookend of petition and intercession, which we’ve already discussed.