When I was ordained, I received many useful gifts.  I received a Prayer Book-Hymnal combination embossed with my name.  I received an oil stock, in which to keep holy oil with which to anoint the sick.  I received a stoles of every liturgical color, so I would be appropriately appointed throughout the church year.  But the most memorable gift I received was not a bible, prayer beads, or even a gift card to a restaurant.  It was a Jesus action figure.  (Yes, you heard that correctly.)  The Jesus action figure was 11 inches and 5.6 ounces of glossy, molded plastic salvation.  His posable arms could be raised to heaven in prayer or forward to bless the masses.  Most spectacularly, Jesus action figure was equipped with what the manufacturer emblazoned across the packaging as his “gliding action.”  The figure had at its base tiny casters, so that Jesus rolled from placed to place, hovering, God-like, a millimeter in the air.  Jesus’ feet never touched the ground.

In case you’re thinking that a Jesus action figure is unconnected to reality, we might ought to look again at today’s Liturgy of the Palms Gospel.  This is the year we read from Luke, and Luke’s palms narrative is different from that of the other Gospels in one very important respect: In it there are no palms!  Did you notice that?  In Luke, we have no mention at all of the people waving palms fronds before Jesus.  Instead, in Luke the people take off their cloaks and cover the road in front of Jesus.  And so, it turns out the Jesus action figure is, at least in this instance, biblically accurate.  In Luke’s Palm Sunday narrative Jesus’ feet never touch the ground.

There are, of course, innumerable instances in literature where a cloak is placed on the ground to prevent earthly contact with someone’s feet.  The most pronounced examples are from the Age of Chivalry, when dashing knights protected the feet of lovely maidens by laying their cloaks across muddy paths.  Those maidens are always surrounded by a heavenly aura, as chivalry insisted that they are something more than merely human, that the knight must protect them from being sullied by the world.

That is exactly what’s going on in Luke.  The Evangelist even adds that the people laid their cloaks on the road and praised Jesus “for all the deeds of power that they had seen.”  In other words, the people want Jesus to be God-like, something powerful and other.  They don’t want Jesus to be like them, and they create a pretense to the contrary, so that Jesus is not sullied by the dirt and grime of the world.

Christians today very often might as well be those gathered on the downslope of the Mount of Olives in Luke.  Too often, the Jesus described by churches and yearned for by people is the one who glides a half inch off the ground; the one who performs deeds of power on request; the one who, though he looks like us, isn’t quite the same thing.  Indeed, such a Jesus has been desired throughout Christian history.  Two huge movements in the early Church, Docetism and Apollinarianism, each in its own way claimed that Jesus wasn’t really like us, that he wasn’t of the mud and muck of this world.  Jesus was God pretending to be a person, akin to the Greek god Zeus taking on human form.  Jesus glided above us, so to speak, full of power and never quite human.

But it turns out that Jesus enters Jerusalem on Palm Sunday and will not perform deeds of power.  Instead, he gets angry, and then sorrowful, and then anxious, “sweating tears like blood,” as Luke describes him in the Garden of Gethsemane.  The people see this, and suddenly the illusion they’ve constructed is dispelled.  Jesus doesn’t exist above the fray; he charges into it.  Jesus doesn’t stand apart from the things that vex us, and weaken us, and bring us to the ground on our knees; he opens himself to the full range of human joy and pain.  Jesus doesn’t glide above the dirt; he lives in it.

I think that’s why, later in Passion Week, the crowd so quickly turns on Jesus.  That’s why the joyous hosannas so easily become enraged cries of “Crucify him!”  The crowd is looking for a particular kind of messiah, and once Jesus gets down off that colt, he just looks and acts human.  In their disappointment, disillusionment, and disgust, the crowd encourages Pontius Pilate to treat Jesus like the dirt in which he plants his feet.  And as Jesus succumbs to being humiliated, scourged, and hung on a cross, the crowd feels justified in abandoning an all-too-human messiah. 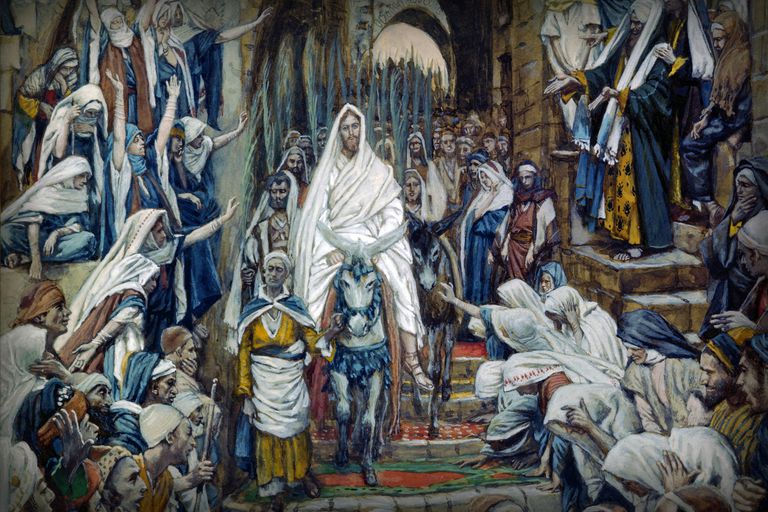 But here’s the thing: Docetism and Apollinarianism were both declared heretical by the Church, and the Jesus action figure is, too.  Rightly, the Church can have nothing to do with a Jesus whose feet don’t touch the ground.  Such a Jesus is good for the occasional parlor trick, but not for real life.  We don’t need the Jesus of Southern Sunday school portraits, with doe-y, upcast eyes and a gauzy glow.  We don’t need the Jesus who glides around in, but is not of, the world.  We need the Jesus who shows up in the ambulance bay, and after the hurricane, and when we feel abandoned as the world around us is crashing.  We need the Jesus who embraces us because he has known our joy, our sorrow, and our loss.  We need a fully human Jesus, who steps, deliberately and repeatedly, into the muck and mud.

That Jesus is not one who hurls a lightning bolt or wrenches us out of the world, but he is the one who will walk through the world with us, from the hosannas of the Mount of Olives to the agony of the Mount of Calvary.  He himself makes that trip this week.  I hope we will walk with him.

2 thoughts on “Gliding an inch off the ground”